The progressive urbanization of our cities particularly in Bogota, accelerated the settlement of families of rural origin in Colombia, aggravating the situation by the moment population displaced by the armed conflict. This migration flow generated the formation of at-risks groups of invasions that were deprived of basic goods and services provided by the state. Precarious housing, the total lack of the most basic services has been an ongoing threat to life itself and occupies all family members in the search for solutions to subsistence problems.

As a result, the original solid family becomes vulnerable and ends up breaking under the pressure of the demands imposed by urban life. These irregularities are the gradual processes that usually begin with the abandonment of the family by their responsible adults, ending up in the homelessness of children, who must survive on their own in conditions of deprivation and uncertainty.

"children are constantly victims of blatant abuse of their fundamental rights."

These circumstances led to a rapid growth in the problem of street children in the 1980’s, who were completely detached from their families. Because of this, the child learns the rules of street survival acquires behavioral patterns of street sub-culture, prostitution, sexual exploitation, criminal behaviors, and consumption of psychoactive substances.

Another situation causing this problem has been the poor access to education for a large percentage of the population, which has an impact on the increase of population growth. This is a direct result of lack of adequate birth control, basic sex education, the propagation of premature relationships and unions, initiating sexual intercourse at a very early age (12, 13 y/o  female, and 14,15 y/o male), and constant change in sexual partner, which as a consequence result in the reckless abandonment of engendered children.

Fundacion Niños de los Andes, as a result takes into account this socio-family and geographical context, through which it proposes a comprehensive care project for children living on the streets.

Today intrafamily violence rates are so high that cases of abused children continue to increase. According to Colombian Legal Medicine data, in the first four months of 2019, 7,141 cases of sexual abuse were reported. Each day 59 children are victims of sexual abuse in our country. This shows the unfortunate reality in which Colombian children are constantly victims of blatant abuse of their fundamental rights. 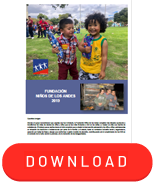